Helbig "finds stunningly beautiful subject matter, art photography whose message is in the eye of the beholder." CTV

Beautiful Destruction. "It's amazing work. It's beautiful and it's tragic all at once. It's something else." Live Eighty Eight Five, Ottawa.

Ottawa, ON, Mar 13, 2013 It's been more than 50 years since Inundation Day -- July 1, 1958, when ten Ontario communities along the St. Lawrence were purposefully flooded and 6,500 people relocated so the St. Lawrence Seaway could come into being. This spring, an Ottawa photographer will be collecting stories about the so-called "sunken villages" - that handful of Canadian villages have been hidden under the St. Lawrence Seaway for over 50 years.

Todd Moe talks with Ottawa aerial photographer Louis Helbig about his "Sunken Villages" project of photos of the lost communities between Cornwall and Prescott, Ontario. For the last few years, Helbig has arranged exhibitions of his birds-eye-view of the underwater remnants of houses and streets. Now, he's looking for stories and family histories to accompany the photos.

Since the 1950s, a handful of villages have been hidden under the St Lawrence Seaway for over 50 years. We’ll hear how aerial photographs are bringing back their memory back to the surface.

Ottawa Sun entertainment reporter Denis Armstrong interviews Louis Helbig about FestivalX at Alteriors Contemporary Furniture, the site of his Exterior. Interior. Alterior. exhibition for Ottawa's 2012 Photography FestivalX. It is one of Denis Armstrong's recommendations of things to do in the coming days.
video

The Oilsands as Art: Alberta's oilsands have been described as dirty, booming and big. But Ottawa-based aerial photographer Louis Helbig's latest exhibit, Beautiful Destruction shows them from a different viewpoint: through the lense of a camera one thousand feet up.

The oilsands are a subject for tireless debate and discussion. But as debates are getting increasingly polarized, are civil, balanced discussions slipping away?

watch the live interview in QuickTime

When it comes to photography, Louis Helbig prefers a birds-eye view. He takes pictures through the window of his 1946 Luscombe, a two-seater airplane which he flies above Canada's vast landscape. The award-winning photographer produces large format images of a variety of subject matter relating to history, nature, recreation and the environment. His limited edition prints are available to purchase. Louis continues to host public speaking engagements and exhibitions across the country. 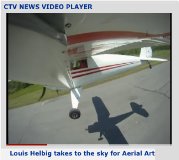 See the episode (to zip to the clip featuring Louis Helbig's work click on 15:00 minutes) 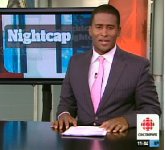 "For our Night Cap we visited an art exhibition in the city tonight. These stunning aerial photos were taken by local photographer Louis Helbig. If you want to get a closer look at his pictures they will be on display at the Shanghai Restaurant on Somerest Street in Chinatown until May 7th."

To see the news clip of the exhibition click here and go to the end of the newscast.

Interview with Katfish Morgan with and the Live 88.5 Start Up morning show crew's Amal Wahab and David Schellenburg.

Described the images of Beautiful Destruction as "stunning."